InContext explored four case studies of alternative consumption and production patterns that were initiated at local level. We strove to improve our understanding of how these "niches" of alternative consumption and production practices have been created and to what extent these niches are suited for diffusion and mainstreaming.

The aim of the four case studies was to provide an understanding of the interaction of the external context and factors that are linked to agent-based / internal factors. The external context includes social norms, infrastructures and policies, while the internal context is set up by feelings, values or needs. We investigated questions like why individuals participate in a scheme, what makes them follow through or opt out, how a group governs itself and how they cope with external constraints. 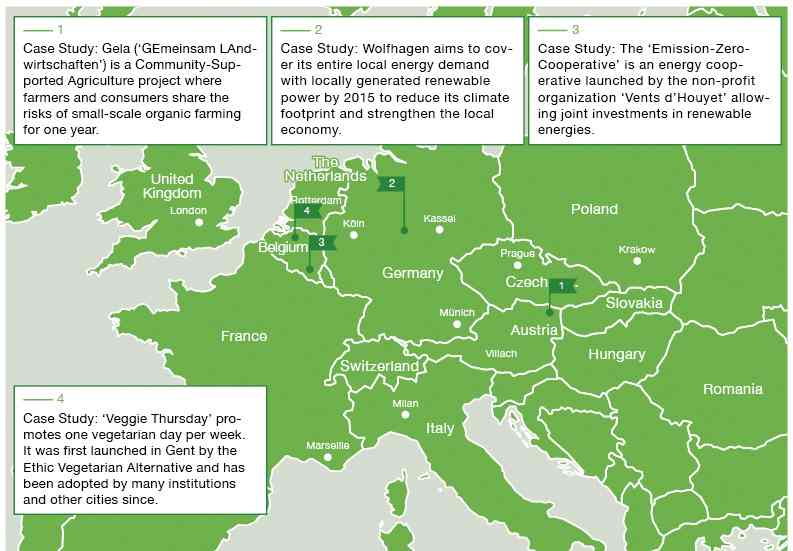 Gela (‘GEmeinsam LAndwirtschaften’) is the first Community-Supported Agriculture project in Austria. In this project consumers can sign up in advance for an annual or a seasonal supply of organic vegetables grown at a local farm (‘Gärtnerhof Ochsenherz’). The scheme aims to provide the producers with security of income over the year thereby allowing them to optimize their farming practices according to the principles of biodynamic farming. In exchange, consumers enjoy a weekly supply of organic, locally grown vegetables and seeds of good quality, purchased directly from the farmers. The project is co-managed by a group of active consumers and the farmers.

Wolfhagen is a small town situated 30 km west from Kassel. The case study focuses on the local process of aiming to become a 100% renewable energy community and reducing the local climate footprint by fostering energy efficiency and renewable energy. The city of Wolfhagen aims to cover its entire communal energy need (households, commercial and industrial business) from 2015 onwards exclusively with locally generated renewable power. Apart from the positive effects on the communal climate footprint, positive effects on the local economy and an increase in local value should be realized. The measures and projects for fulfilling this aim are put into practice with an intensive public participation of the local citizens, but it includes also people who have been active in local politics before. Wolfhagen is one (of five) winners of the federal competition 'Energy-efficient city '.

The Emission-Zero-Cooperative ('Emission-Zero') is an energy cooperative launched in 2007 by members of a non-profit organization named ‘Vents d’Houyet’ (founded in 2002). Vents d`Houyets` original purporse was to encourage citizens to engage in renewable energy by providing information. In 2006 Vents d'Houyet created its first citizens wind turbine. The special feature was that it was a "children's wind turbine", which was owned by 800 children that were granted 2000 shares (to the value of 100€ each) through a public subscription. The success of the children's wind turbine resulted in the creation of the cooperative Emission-Zero. While the children's wind turbine had a strong focus to raise awareness, Emission-Zero is more focused on raising capital for and volumes of renewable energy. The energy cooperative connects about 1000 cooperators and 10 000 affiliated members (2011)  that share the goals of shifting the energy system towards renewable energy and strengthen local ownership. By late 2010 Emission-Zero had raised 1,5 million Euro. By 2011 it built seven wind turbines that are now jointly owned (and democratically managed) by the cooperative. Thus the energy is produced and consumed locally. The dividents generated flow back to the share owners of the cooperative.

Case Study 4:
Veggie Thursday: from Gent to Brussels, and beyond...

The idea of a vegetarian day per week was first launched in Gent in 2009 by the EVA (Ethic Vegetarian Alternative) association. It has been adopted by a large number of actors including about 30 schools within the city of Gent.  Largely reported within the medias worldwide, the Veggie Thursday has progressively been established by many other cities (Hasselt, Malines, Eupen and Sint-Niklaas), and then Brussels in 2011. This case study will relate the process which led to the setting of this veggie day each week, and how it has been disseminated, especially in Brussels.

The case study assessments are presented in three papers:

Alternative Collective Consumption and Production Niches - Case Study Synthesis Report
This synthesis report reflects on the four cases of alternative consumption and production niches observed in InContext. From the
cross-examination of the empirical material, it distills tentative conclusions on what can be learnt from the emergence and governance patterns of these niches.

Case Studies_Empirical Report
This empirical report presents the four case studies of the InContext project. The general purpose is to provide a better understanding of how niches of alternative and more sustainable consumption and production practices are created, and how they can later be diffused or mainstreamed.

Case Study Analysis. Document Analysis
A document analysis for each of the case studies, drawing preliminary results and hypotheses on drivers and barriers for the creation and diffusion of innovative, more sustainable production and consumption practices in the food and energy domains.